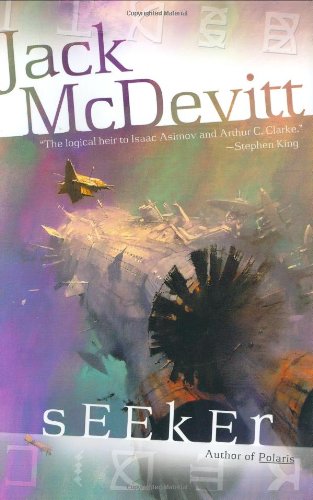 Ideas abound in McDevitt's classy riff on the familiar lost-space-colony theme. In 2688, interstellar transports and left a theocratic Orwellian Earth to found a dictator-free society, Margolia—and vanished. Nine thousand years later, with a flawed humanity spread over 100-odd worlds, Margolia and its ships have become Atlantis-type myths, but after a cup from falls into the hands of antiquarian Alex Benedict, the hero of McDevitt's (2004), Alex determines to win everlasting fame and vaster fortune by finding them. Female pilot Chase Kolpath, this book's narrator, gutsily tracks the ancient on a breathless trek across star systems and through an intriguing mystery plot, a bevy of fully realized characters, ingenious AI ships and avatars of long-departed personalities who offer advice and entertainment. The scientific interpolations are as convincing as the far-future planetscapes and human and alien societies, bolstering an irresistible tractor beam of heavy-duty action. This novel delivers everything it promises—with a galactic wallop.