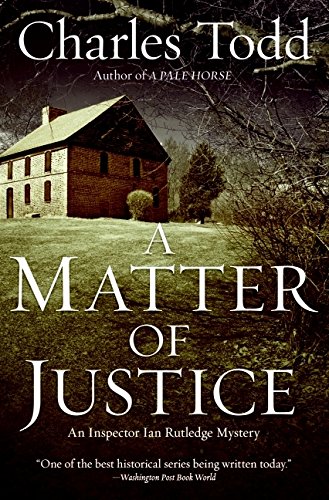 A Matter of Justice

In the stellar 11th Insp. Ian Rutledge mystery (after 2007's ), Todd (the pseudonym of a mother-son writing team) seamlessly combines a fair-play whodunit with a nuanced look into the heart of darkness in the human soul. During the Boer War, Pvt. Harold Quarles takes advantage of a Boer attack on a British military train to enrich himself. When two decades later his battered corpse is found grotesquely displayed at his country residence in Somerset, Scotland Yard's Ian Rutledge must sift through the plethora of lies, omissions and motives surrounding Quarles, who had become a successful investment adviser in London. Because the victim was almost universally despised in Somerset, Rutledge has no shortage of suspects. The inspector's own inner struggles, stemming from his guilt over his morally questionable actions during WWI, make him a more human and complicated protagonist than most other series sleuths.