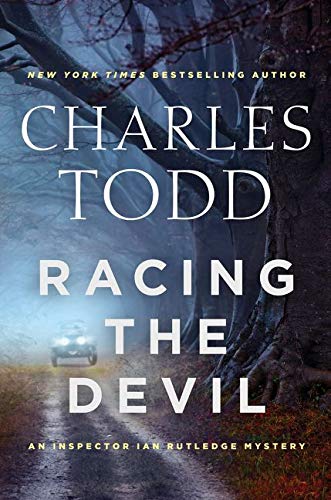 In the first chapter of bestseller Todd’s suspenseful 19th whodunit featuring Scotland Yard inspector Ian Rutledge (after 2016’s No Shred of Evidence), Andrew Brothers, a veteran of WWI, is nearly run off the road by another car while driving in the South of France in 1919. A year later in East Sussex, Rector Wright, the rector of St. Simon’s church, borrows a motorcar belonging to another WWI veteran, Captain Standish, without the officer’s permission. In a heavy rainstorm at night, Wright is killed instantly in a crash. The local constable, troubled by evidence of another vehicle at the scene of the tragedy, sends for Rutledge; he finds traces of paint on the captain’s car, which suggests that the crash was no accident. Given that the dead man appeared to have no enemies and the collision occurred in the dark, Rutledge pursues the notion that Standish was the intended victim. As always, Todd (the mother-and-son writing team of Caroline and Charles Todd) maintains a high degree of tension throughout and populates the story with vivid characters bearing the external and internal scars of war. Agent :Lisa Gallagher, DeFiore and Company. (Feb.)

This review has been corrected to remove an incorrect word and add a missing one; the agent has also been updated.