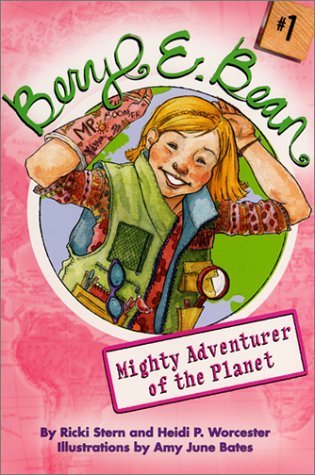 Ten-year-old Beryl E. Bean has some big shoes to fill as the newest spunky, inquisitive heroine to grace a series for primary-grade readers. The star striker on her soccer team, Beryl thrives on all the guts and glory. But when she's sidelined with a broken arm, her soccer obsession (and her ego) are dealt a terrible blow. On the sidelines with her injury, Beryl meets a much-needed new best friend, Mary P. Stir-crazy. Beryl accepts a mysterious challenge from her friendly, involved stepfather: she will "embark on an adventure extraordinaire" as a Mighty Adventurer of the Planet, and Mary P. will play sidekick. Though Stern and Worcester do a respectable job of introducing a cast of characters and an intriguing scenario, their plot fizzles a bit, losing plausibility once the girls' adventure begins (Beryl helps the paleontologists at the natural history museum make a useful discovery). The book's busy, magazine-like design—colored pages with colored type in varied fonts, drawings, digitally rendered collages and borders, etc.—demands a certain sophistication from readers, who will need to make sense of unconventional punctuation and paragraphing, etc. The language, too, is more complex than is generally found in books for newly independent readers; on the other hand, more experienced readers are likely to lose patience with the thin plotting. Still, those who have exhausted the adventures of Amber Brown, Ramona Quimby, Harriet Welsch and notebook-keeping Amelia may enjoy finding a new girl on the block. Ages 7-9.