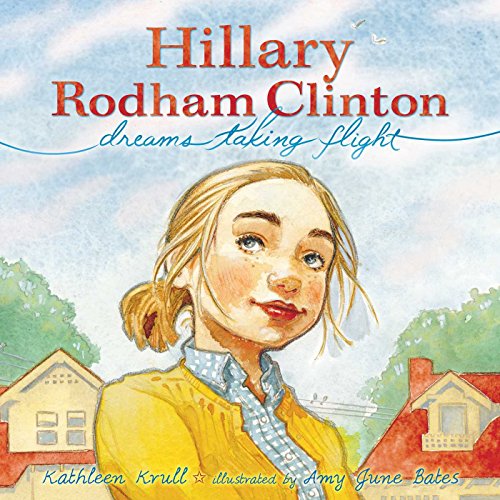 This admiring picture book biography views Hillary Rodham Clinton through one specific lens: her whole life is about breaking gender barriers in pursuit of sky-high goals. Krull begins with Clinton’s childhood ambition to become an astronaut (“She wrote to the national space agency to volunteer. But it was 1961, and some paths were still closed to women”) and ends with her run for the presidency: “Was the land ready? No matter—she was propelling her way into history.” Even the detailed endnotes maintain this simplified focus: the failure of her attempt to reform health care as First Lady is attributed to “several reasons, one of which was that so many people found Hillary’s ambitions and independence upsetting.” Bill Clinton comes across as a rather shadowy 800-pound-gorilla (is he the hunk pictured presiding over the Yale Law Library?), while the text, which is plenty inspiring in its own right, is weakened by supplemental aphorisms on every spread (“You don’t have time for fear” is the maxim accompanying the spread on her breakout Wellesley graduation speech). Bates ( ) contributes radiant if consciously heart-tugging illustrations, imbuing her subject with both an endearing geekiness and determined idealism. Ages 5–10.