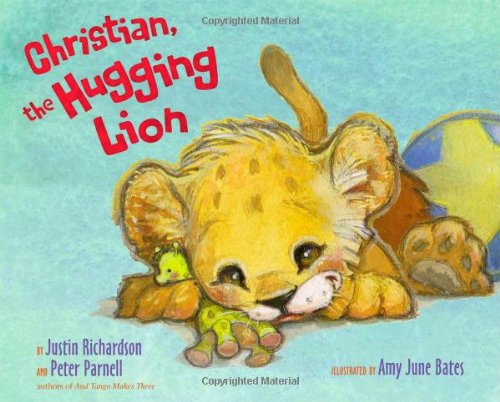 Richardson and Parnell, the writing team behind , turn to another heartwarming real-life animal story in this retelling, the second picture book to star Christian, following 2009's . In subtly evocative prose, the authors emphasize storytelling as they hit the major plot points of the now familiar story: Ace and John's discovery of the lion cub in a cage at Harrods, Christian's adventures and growing pains in London (“Christian became a very well-behaved little cub. Most of the time”), the eventual delivery of the lion to Kenya, and the trio's climactic reunion when Ace and John return to find Christian grown-up and with cubs of his own. With a dramatic leap, Christian rejoins his friends in a jubilant embrace that fills an entire wordless spread. Playing off the understated text to humorous effect, Bates ( ) contributes balmy watercolor, gouache, and pencil illustrations that highlight Christian's playfulness, as he sprawls out on Ace and John's sofa or gives “clumsy” hugs at the pub. It's a tender and particularly kid-friendly version of Christian's story. Ages 4–8.