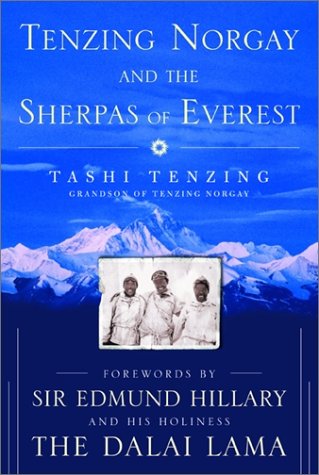 TENZING NORGAY AND THE SHERPAS OF EVEREST

This latest Himalayan climbing tale could be subtitled "Homage to the Sherpas," for as Tenzing knows, no expedition has ever reached the summit of Everest without their aid. A former mountaineering guide himself, Tenzing retells some of the sport's most famous climbs, focusing on the career of his grandfather, Tenzing Norgay, "the most renowned of all Sherpas, Man of Everest, Tiger of the Snows," who made the first successful ascent of Mt. Everest with Sir Edmund Hillary in 1953. He also details his grandfather's later years, including the controversy about who actually reached the summit first (it was likely Hillary by a nose, Tenzing says) and the ambivalence Norgay felt about his sudden celebrity. But what distinguishes this book from the many others on Himalayan climbing is Tenzing's exploration of Sherpa society and history. Tenzing, who is married to an Australian (who collaborated on this book) and lives in Australia, is conflicted over the modern world's effects on the Sherpas. On the one hand, steady Himalayan tourism and the demand for Sherpa guides has been a "blessing"—more jobs has meant more money and better living (a lower infant mortality rate, for example). On the other hand, Tenzing admits that the boost in climbing has led to environmental degradation and increased drug use among Sherpas. Even though his story is unlikely to climb the bestseller lists, it will appeal to the wide audience for survival books, as it tells familiar stories from a fresh point of view. Illus.