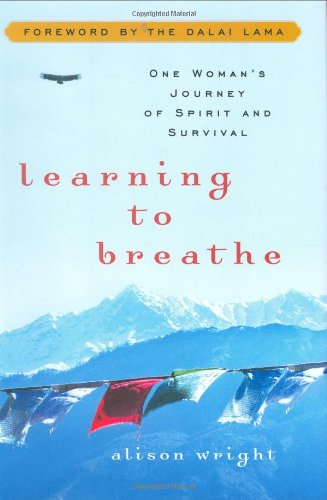 Learning to Breathe: One Woman’s Journey of Spirit and Survival

Photojournalist Wright has gone to the ends of the earth, including some mountaintops, in a career that has documented the human wonders of the world, especially resilient children and endangered cultures. In this memoir she turns her lens on herself and her own astonishing story. The victim of a horrific bus crash in Laos in 2000, Wright should have died of her grievous injuries. She survived, and in this book retraces the steps of her journey of physical recovery, spiritual development and literal return to the scene of the crash. An Asia enthusiast, the author was led by work and temperament to Buddhism and some of Asia’s most compelling Buddhist figures, including Burmese dissident Aung San Suu Kyi and the Dalai Lama, who contributes a foreword. Wright’s editors owe this tale of courage and gratitude more respect in the form of harder editing. The author’s spiritual insights are fascinating and should have been teased out more. A chapter set in Australia is an interesting but irrelevant sideshow, and chronology is occasionally confusing. This inspiring story deserves a wide audience and better editing.