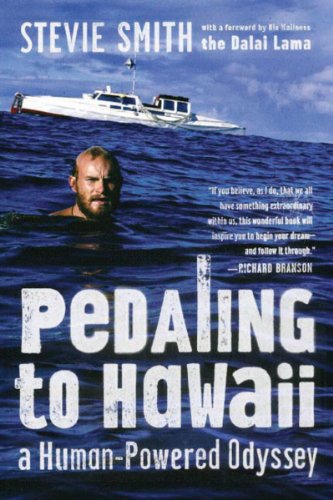 Pedaling to Hawaii: A Human-Powered Odyssey

In 1994, two English adventurers in their late 20s embarked on Expedition 360, an underfunded attempt, initially sans sponsorship, to circumnavigate the world using only human power. Instead of relying on sails, balloons and motors, Smith and his traveling companion, Jason Lewis, used bicycles, skates, kayaks and their 26-foot pedal boat, "a ruthlessly Spartan composite of varnished plywood, plastic, and steel as cosy as a cheap coffin." Crossing the English Channel that summer, they biked through France, Spain and Portugal, then set forth on a "seemingly endless expanse: 4,250 nautical miles of ocean to pedal across at walking speed." Pedaling through the Atlantic in two-hour day shifts and four-hour night shifts, the duo arrived in Miami 111 days later, and then cycled and skated across America, eventually pedaling the Pacific. Smith is an accomplished writer, contrasting evocative descriptions of dolphins, seascapes and beckoning vistas with stories of days of fatigue, boredom and his own wild fantasies. He interweaves environmental observations and his inner spiritual quest with powerful passages on the more harrowing moments. Neither man had previously spent a night at sea, and mentions of their oversights and inexperience add to the suspense in this entertaining yarn. Nine maps, 10 b&w photos.