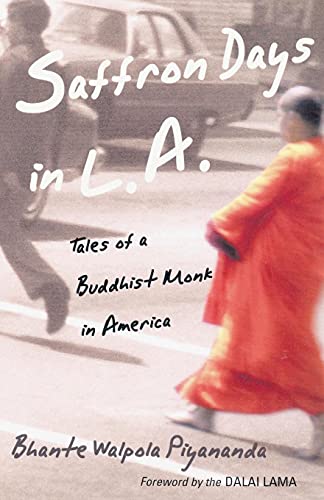 SAFFRON DAYS IN L.A.: Tales of a Buddhist Monk in America

Piyananda, or Bhante ("spiritual friend"), as he is often called, is a Theravadan Buddhist monk from Sri Lanka who came to Los Angeles almost 25 years ago and established a Buddhist center there. In this pleasant collection of 20 stories about his experiences in the U.S., Bhante weaves narrative, sacred texts and cultural observations into a serviceable whole cloth. For the average American his perspective as a monk is unusual enough, and his recounting moments of insult for wearing the titular yellow robe are touching and inspiring, all the more so because they are told empathetically to a young fellow monk who doubts his own ability to withstand such harassment. Some stories are lighthearted, as when he became known as "Punkie Monkie" to some street kids; others are more troubled, as when he was often mistakenly abused as a Hare Krishna. They all have a wonderful, if sometimes bittersweet, flavor in this East-meets-West compilation. The vignettes are sometimes too pat, and the tacked-on scripture feels stylistically clunky, but the sacred words do make the book's ultimate purpose of interpreting Buddhism to Westerners explicit. This book has value for those who would like to see the world through a foreign monk's eyes or just learn about the cultural friction that arises as Buddhism makes its way in America. Although more advanced students will probably not find much substance here, the Dalai Lama accurately says in the foreword that Piyananda "has created a book to which all readers can relate."