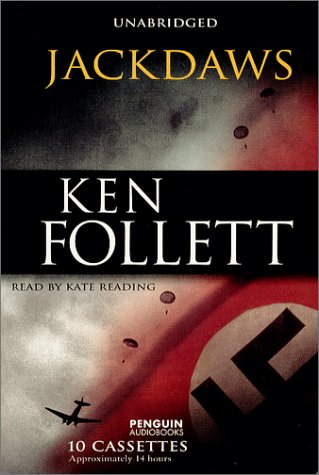 Time is running out. With D-Day rapidly approaching, the Nazis are actively trying to quash the French resistance. Meanwhile, Britain's Special Operations branch is working hard to supply the resistance with intelligence, supplies and agents. Felicity "Flick" Clairet is one of England's most effective operatives in northern France. Having failed in an assault on the Nazis' main European telephone exchange, she regroups in England for another attempt, this time with an all-female team that will infiltrate the exchange under the guise of a French cleaning staff. Unfortunately, finding female agents fluent in French proves impossible and Flick resorts to crash-training nonprofessionals for the task. Imagine (minus the campiness) in . Written in Follett's (, etc.) riveting style and with his penchant for historical detail, the Jackdaws (the codename of the all-girl team) are given a heightened air of authenticity with Kate Reading's performance. She flavors her confident delivery with a wry cynicism that is inherent to Flick's character, and her use of international as well as regional accents keeps the rapid narrative flowing flawlessly.