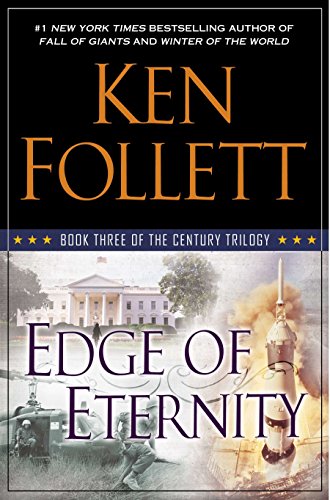 In the ambitious, commanding capstone to his multigenerational Century Trilogy (after Winter of the World), Follett expertly chronicles the pivotal events of the closing decades of the 20th century through the eyes of a vast array of deftly-drawn characters, all suffering the slings and arrows of a world marred by war and global unrest. Among them is Rebecca Hoffman, a good-natured school teacher in Communist Berlin, who discovers in 1961 that her secretive husband, Hans, is a clandestine Stasi agent and has been spying on her for years. When she eventually confronts him, he angrily vows to destroy her family. Elsewhere, mixed-race, civil-rights-minded George Jakes forsakes a lucrative law career to work for Bobby Kennedy and the Justice Department, then battles racial inequality as a congressman. Dmitri “Dimka” Dvorkin, an aide to Nikita Khrushchev, finds himself embroiled in heated U.S.-Soviet nuclear political power plays and his sister, Tanya, thrusts herself into the fray of governmental global turmoil. Cameron Dewar, a senator’s grandson, also becomes politically active with espionage on his mind while Rebecca’s brother, the musician Walli, must choose between a rising-star career in rock-and-roll and his pregnant lover, Karolin. Sweeping through the Johnson, Nixon, and Reagan administrations, Follett’s smooth page-turner concludes in 2008 with an epilogue set on the night of President Obama’s electoral victory. This mesmerizing final installment is an exhaustive but rewarding reading experience dense in thematic heft, yet flowing with spicy, expertly paced melodrama, character-rich exploits, familial histrionics, and international intrigue. (Sept.)
close
Details