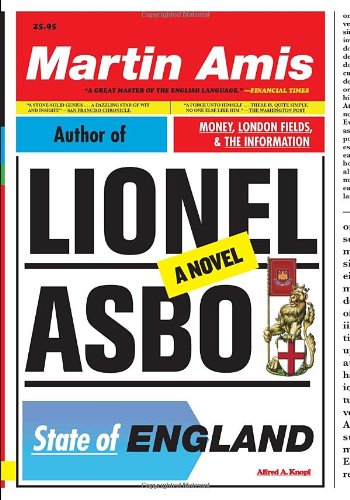 If there’s a more depraved human being than the title character of Martin Amis’s savagely funny new novel, Lionel Asbo: State of England, you do not want to meet him. Like earlier Amis creations Keith Talent (London Fields) and John Self (Money), Asbo’s very name (ASBO is the U.K. acronym for Anti-Social Behavior Order) is a tipoff of the author’s intent. And like those earlier Amis novels, Lionel Asbo: State of England crackles with brilliant prose and scathing satire. Lionel first runs afoul of the law at the age of three years, two days (“a national record”) for throwing bricks through car windows. By 21, he’s a vicious criminal who raises pitbulls on a diet of Tabasco Sauce and malt liquor and terrorizes his seedy London neighborhood. So far so Amis. So who could predict that, from this delightfully nasty setup, an author the New York Times once called “fiction’s angriest writer” would craft a novel so... Dickensian, a novel with such... I hate to even say it... heart. That’s because Lionel Asbo: State of England also features a hopeful, lovable orphan in need of a benefactor, Lionel’s nephew Desmond Pepperdine. And when Lionel wins £140 million in the national lottery, what follows is hilarious and strangely compelling—a gleefully twisted Great Expectations. Lionel’s family tree is a tangle of early breeding: his mum, Grace, had seven children by the age of 19: a girl, Cilla, then five boys named after Beatles (the last is named Stuart Sutcliffe) and, finally, Lionel. Only Cilla and Lionel have the same father, so, despite the age difference, the bookended siblings are known as “the twins.” Des is Cilla’s boy and when she dies young, Lionel is left to raise his smart, sensitive nephew, who is only six years younger than him. Lionel takes to his new role, encouraging Des to put down his schoolbooks and go break windows with his mates. Then Lionel gets rich and becomes a tabloid sensation, the Lottery Lout. He lives large, hires a publicist, and starts a phony relationship with one of those beautiful, boring women famous for being famous (think: a British Kardashian.) Wealthy Lionel is even worse than poor Lionel; boorish, brutal, wistful for his old life. “Not happy. Not sad. Just numb,” as he describes himself. “The only time I know I’m breathing is when I’m doing some skirt.” Amis adopts a big, playful storytelling voice in this book. He riffs like a jazz master, in and out of vernacular, with brief gusts of description, all driven by a tight bass line of suspense. You see, Des is hiding a secret and if Lionel finds out... well, let’s just say it would be better if Lionel does not find out. A double-edged question holds this terrific, lithe novel: will it be the fabulously wealthy Lionel who takes care of Des, or the sociopath? Reviewed by Jess Walter, who is the author of six novels, most recently Beautiful Ruins (Harper 2012). He won the 2005 Edgar Award for his novel Citizen Vince.
close
Details