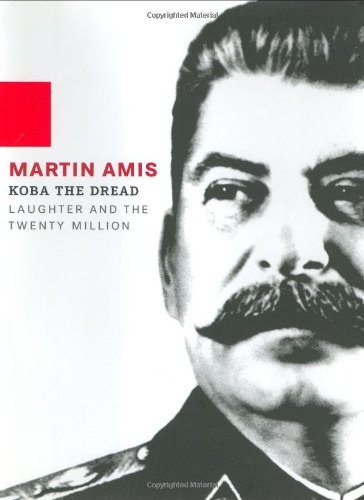 KOBA THE DREAD: Laughter and the Twenty Million

Everyone knows what the Holocaust was, but, Amis points out, there is no name for and comparatively little public awareness of the killing that took place in the Soviet Union between 1917 and 1933, when 20 million died under a Bolshevik regime that ruled as if waging war against its own people. Why? The U.S.S.R. was effectively a gigantic prison system that was very good at keeping its grisly secrets. Too, communism had widespread support in the rest of the world, as Amis reminds us. Not quite a memoir, this book sandwiches a lengthy treatise on the horror of life in Leninist and Stalinist Russia between Amis's brief personal takes on his gradually dawning awareness of Soviet atrocities. In his first and final pages, he deals with three generations of "dupes" who supported Soviet rule: that of H.G. Wells and George Bernard Shaw; that of novelist Kingsley Amis, the writer's father and member of the Communist Party in the 1940s; and that of leftist contemporaries of Martin Amis himself, notably the writer Christopher Hitchens. Throughout, Amis snipes at Hitchens in particular (" 'What about the famine?' I once asked him. 'There wasn't a ,' he said, smiling slightly and lowering his gaze. 'There may have been occasional ....' ") Alexander Solzhenitsyn tried to tell the West about Stalinism in the '70s, but this grim patriarch had no appeal for the New Left, a generation interested only in "revolution as play," Amis says. Most readers won't be interested in the author's private quarrels, but in the bulk of the book he relates passionately a story that needs to be told, the history of a regime that murdered its own people in order to build a better future for them.