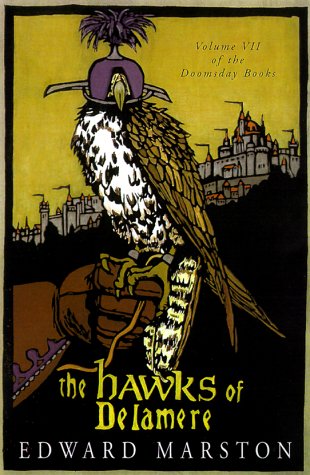 Volume seven of Marston's acclaimed Domesday series (The Stallions of Woodstock, etc.), a solid historical mystery, provides plenty of conflict--between church and state, earl and king, Norman and Saxon, English and Welsh--as well as a lesson in medieval feminism. Loutish Hugh d'Avranches, Earl of Chester, is hunting in the forest when his prize hawk drops from the sky, pierced by an arrow. Enraged, Hugh sees to it that a pair of hapless poachers, father and son, hang on the spot for the crime. The next day one of Hugh's hunting companions, Raoul Lambert, also falls victim to a murderous archer, and this time there are no handy scapegoats. Meanwhile, a party of royal commissioners arrives in Chester to rule on some legal disputes, but first they find themselves helping Saxon beauty Gytha and her brother Beollan, whose father and elder brother have perished at Hugh's whim. Beollan has a vital clue to the actual killer's identity, though in a clever shift it develops that who shot Hugh's hawk and Raoul Lambert is less important than why. When Welsh warriors begin to march near the border, a scheming archdeacon thinks the key to averting bloodshed lies with Gruffydd ap Cynan, prince of Gwynedd, held hostage in the Chester castle dungeon. Some readers may be bothered that Gytha and Beollan fail to find justice, indeed drop out of the plot altogether, but the concluding political explanation for the deadly archery comes as a real and satisfying surprise. (Feb.)
close
Details