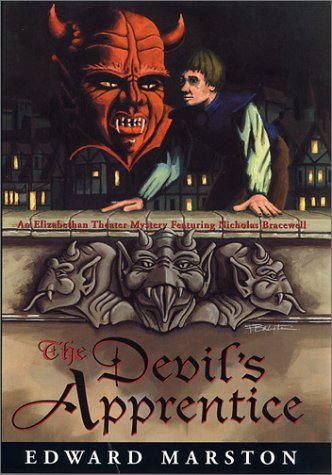 Murder makes a late entrance in Marston's (, etc.) 11th Elizabethan adventure, but enough else of interest is going on to keep the reader engaged. The inn yard of the Queen's Head, London, home of Lord Westfield's Men, lies icy, cold and deserted in the wake of a long bitter winter that has left the members of the company unemployed and desperate. When they get the opportunity to perform six plays at the Essex estate of Sir Michael Greenleaf, the leaders of the company are elated. However, there are two conditions: they must accept Davy Stratton, the son of a successful Essex merchant, as an apprentice, and one of the plays that they perform must be entirely new. An interview with young Davy persuades them to accept him, while a new play, , written by a disgruntled lawyer, promises to be a hit. The joy of the company is short-lived as one catastrophe after another threatens to halt their productions. The playwright lawyer becomes belligerent, an avid Puritan attempts to prevent the company from performing in Essex and Davy himself causes more mayhem and havoc than could ever have been anticipated. When a member of the audience drops dead during one of the performances, series hero Nicholas Bracewell determines to seek the truth. Lively characters, meticulous attention to historical detail, humor and wit more than compensate for the plot's slow evolution.

The Wildcats of Exeter