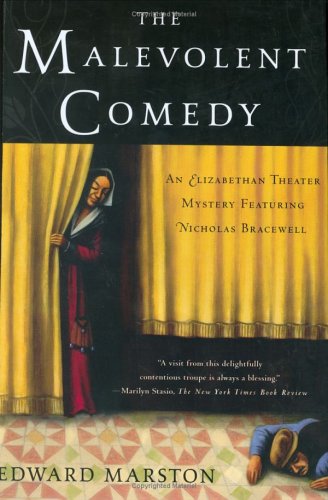 In this lively and entertaining caper, the 15th in Marston's Elizabethan Theater Mystery series (after 2004's ), the Westfield Players have once again fallen on hard times. "Audiences have been thin of late," laments veteran book-holder Nicholas Bracewell, "because we've been guilty of putting on meager fare." To remedy the situation, the company engages upstart playwright Saul Hibbert, whose haughty attitude soon infuriates the players. When Hibbert gets behind in his rent at the Queen's Head Inn, the company nearly loses its performance venue there. Opening night of Hibbert's play, however, is a huge success made even more stunning when a young actor making his debut is poisoned on stage. Suspicions range from Hibbert's many foes to fanatical Puritans who see the London theater world as "purveyors of sin." Though some culprits are known to the reader early on, Nicholas leads a suspenseful search for a kidnapped apprentice that takes us through London's seedier neighborhoods to a satisfying, if unsurprising, resolution. Quick scene changes and witty dialogue provide mostly comical fare with an authentic medieval flavor.