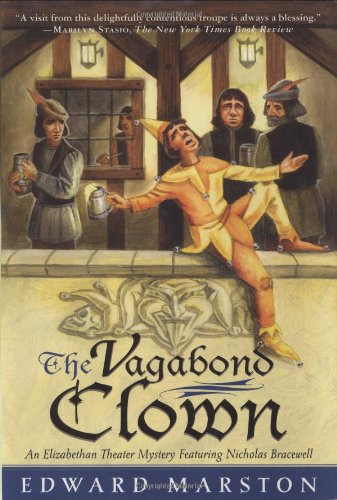 Edgar nominee Marston sends in the clowns in his 13th Nicholas Bracewell mystery (after 2002's ), once again providing an engaging look at the life of players in Shakespeare's day, with their aristocratic sponsors, resident playwrights, actor-managers and apprentice boys (who played female parts). When a riot and murder (both perhaps engineered by a jealous rival company) during a play performance deprive Westfield's Men of their London venue and cripple their clown, the company seems doomed, but ever-reliable, ever-resourceful Nicholas finds a substitute clown and helps to arrange a tour in Kent. The author vividly evokes the sights, sounds and smells of the taverns, inns, guildhalls and castles visited by the players, each of whom is a distinct personality. He shows how important it was for travelers to have skills as carpenters, blacksmiths, wheelwrights and fighters. The suspense builds, as attacks and delays by clever, ruthless adversaries imperil the company's livelihood and very existence. Excellent as the theater background is, the climax may come as a disappointment to some readers, especially those who appreciate how fervently Catholics held to their faith in Elizabethan times.

The Owls of Gloucester