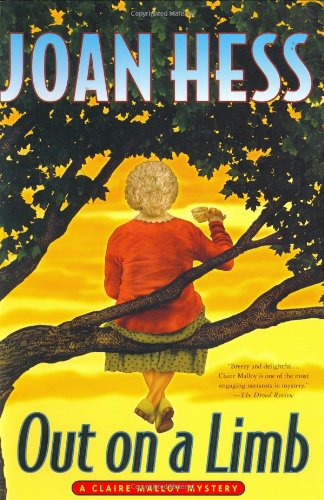 OUT ON A LIMB: A Claire Malloy Mystery

In Hess's 15th lighthearted mystery to feature bookseller sleuth Claire Malloy (after 2000's ), Emily Parchester, a lady of "a certain age," has been persuaded by the Farberville, Ark., Green Party to chain herself to a platform in a tree to protest the planned construction of a new housing development. On arriving home, Claire learns that her 16-year-old daughter, Caron, has taken in a young guest—the baby born to a mother known only as Wal-Mart. While feeding the baby and watching the local news for coverage of Miss Parchester's vigil, Claire is stunned to learn that the developer of the tract the Green Party is trying to stop has been found dead, and that the infant's mother has been brought in for questioning. Claire undertakes to get Miss Parchester out of the tree and reunite the mother and child, despite the repercussions for both her bookstore and her personal life. Farberville boasts a large population of eccentric characters, many of whom are old friends by now. (Fans of Margaret Maron's Judge Deborah Knott will appreciate "Judge Derby Nott," a tip of the hat from one master to another.) With her wry asides, Claire makes a most engaging narrator. The author deftly juggles the various plot strands, letting the local news reporter fill in the action in which Claire is uninvolved. The surprising denouement comes off with éclat.

Maggody and the Moonbeams