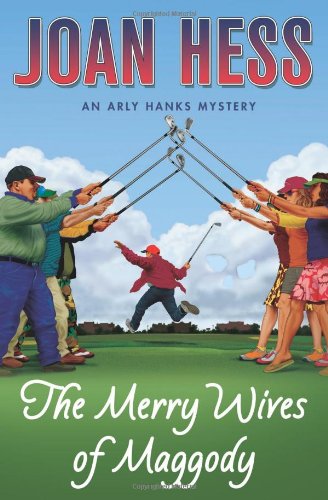 The Merry Wives of Maggody: An Arly Hanks Mystery

Hess’s amusing 16th update on tiny Maggody, Ark., and its crazy cornpone citizens (after 2006’s ) might have been more aptly titled . On the opening day of the first Maggody Charity Golf Tournament, poor braggart Tommy Ridner—who was so excited to win the hole-in-one prize, a $40,000 bass boat—turns up dead in the prize boat, his head bashed in by a golf club. Tommy’s murder creates a flapdoodle for Maggody’s newbie golfers, who hardly knew what a golf tee was before the big tournament. The town’s fearless (and pregnant) police chief, Arly Hanks, is confronted with more shockers after a friend of Tommy’s is also beaten to death with a golf club, and a rising LPGA star reports an assault. What if golf columnist Dan Jenkins wrote a cozy? Perhaps it would turn out something like this slaphappy cozy, raunchy but wise.