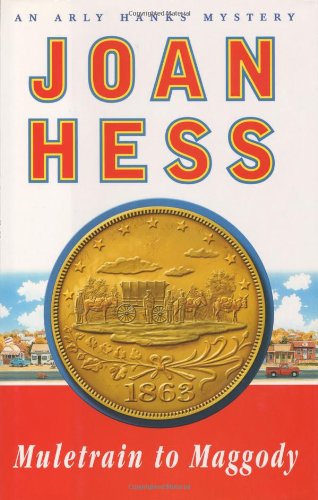 The blend of mayhem and mirth is as potent as ever in Hess's 14th cozy (after 2001's ) centered on the backwoods town of Maggody, Ark. The Stump County Historical Society has funded a documentary film on a local Civil War battle, the Skirmish at Cotter's Ridge of 1863. No one seems all that interested until Miss Harriet Hathaway of the historical society mentions that a shipment of Confederate gold was hidden somewhere during the skirmish and hasn't been seen since. Chief of Police Arly Hanks braces herself for the antics that are sure to follow, as various Maggodians devise plans to find the gold and live a life of luxury thereafter. Dedicated reenactors begin to descend on Maggody, along with various experts involved in the documentary. Among them are a well-known writer of historical romances, her shiftless son, his sluttish fiancée, a historian who often dons the uniform of a Union general and a retired accountant with a passion for genealogical research. One dead body turns up, then another, and Arly has to sort out all the comings and goings of the suspects, and the various motives, and collar the killer before he or she strikes again. With a wit sometimes mordant, sometimes gentle, Hess mines the foibles of those obsessed with the past to offer yet another deliciously funny and deviously puzzling mystery.