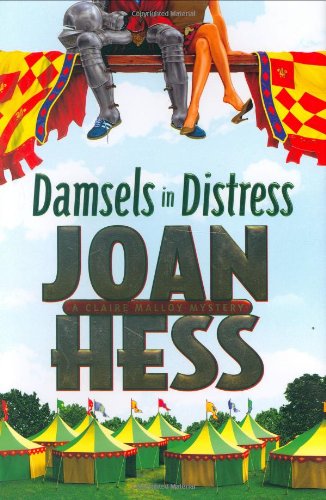 In bookseller Claire Malloy's sprightly 16th outing (after 2006's ), a Renaissance fair descends on Farberville, Ark. Claire, nervously contemplating her imminent marriage to police detective Peter Rosen, finds plenty of distraction when Edward Cobbinwood, a member of the Renaissance fair group, confides that he has come to Farberville in search of his long-lost father. Fearing that her late, unlamented husband, Carlton, was Edward's father, Claire spends time with the fair's organizers, hoping to discover the truth. A house fire claims the life of a mysterious woman named Angie, and the subsequent murder of a talented artist complicates everything. Nimbly sidestepping official attempts to keep her out of the case, Claire, as always, fingers the culprit, this time in a denouement worthy of Dame Agatha herself. Though this installment isn't up to the high standard of , Hess fans will find much to entertain them while eagerly anticipating Claire's wedded bliss in upcoming episodes.