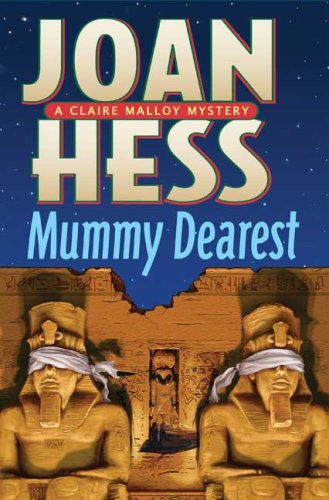 Hess’s delightful 17th Claire Malloy mystery (after 2007’s ) pays tribute to the Egyptian novels of Elizabeth Peters, the pseudonym of Barbara Mertz, to whom the book is dedicated. Claire has at long last married her cop boyfriend, Peter Rosen, and they are ostensibly on their honeymoon in Luxor, Egypt, accompanied by Claire’s daughter, Caron, and Caron’s best friend, Inez. Peter, however, is often called away on mysterious meetings with Egyptian police, and Claire and the girls are left to their own devices. Odd things start happening: the girls claim they’re being followed by a sinister Arab with a scar, a young American woman is kidnapped in the desert, and murders dog an archeological expedition. Hess throws into this heady mix a deliciously eccentric cast of supporting characters, including one Lady Amelia Peabody Emerson, reputed to be the descendant of famous English archeologists. Manipulating everything with a practiced hand, Hess concludes the story in a manner worthy of Hercule Poirot in the classic .