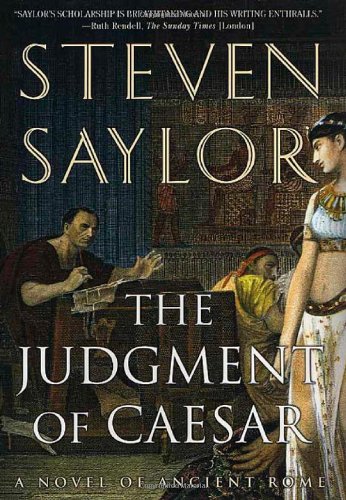 THE JUDGMENT OF CAESAR: A Novel of Ancient Rome

Perhaps this superb historical novel will be the breakthrough Saylor richly deserves. His previous nine entries in his Roma Sub Rosa series ( , etc.) convincingly recreated first-century B.C. Rome through the eyes of a clever and empathetic detective, Gordianus the Finder, whose pursuit of truth has enmeshed him in complicated political intrigues involving such legendary figures as Julius Caesar, Cicero and Pompey. The 10th installment, set in Alexandria, once again features Caesar, now maneuvering between the two rivals for the Egyptian throne, Ptolemy and Cleopatra, in an effort to consolidate his own claim to rule Rome. Gordianus's reputation as an honest fact finder, and his familiarity with the centers of power, make him a valuable asset to all three leaders, even as he grapples with a bitter personal loss. The mystery—the identity of the poisoner who claimed the life of the royal taster and almost killed both Caesar and Cleopatra—is a subplot that appears only late in the book. That the reader is engaged throughout despite this is a compelling testament to Saylor's growth as a writer and to his seemingly effortless ability to imagine characters who feel real. Longtime fans will find the evolution of Gordianus's personal relationships fascinating, but the backstory is not so complex as to bar new readers from entering Saylor's world.