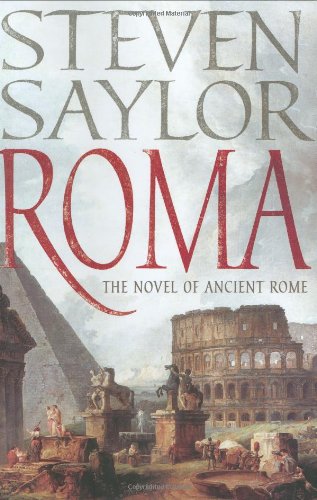 Roma: A Novel of Ancient Rome

Author of the critically acclaimed Roma Sub Rosa series of historical mysteries, Saylor ( ) breaks out on an epic scale in this sprawling novel tracing Rome's extraordinary development over five centuries, as seen through the eyes of succeeding generations of one of its founding families. Skipping over several generations at a time, Saylor puts the Potitii family descendants at the side of Romulus and Remus at the official founding of the city; of Scipio Africanus during the Punic Wars; of the legendary reformers Tiberius and Gaius Gracchus during the turbulent second-century B.C.; and of Julius and Augustus Caesar as the Republic ebbs into Empire. Solidly anchored in fact and vividly imagined, this long book moves at a sprightly clip and features some vibrant personages. One of the most memorable is Pinaria, a Vestal Virgin who loses her innocence to a enigmatic slave, and secondaries such as the deformed giant Cacus who terrorizes the early Roman settlement. Linked by blood and by a gold amulet (in the shape of a winged phallus) that is passed from generation to generation, the Potitii family gets to see some fascinating things.