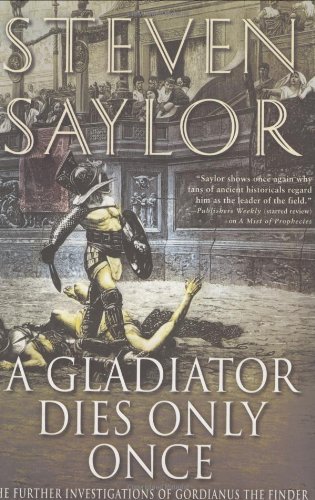 A Gladiator Dies Only Once: The Further Investigations of Gordianus the Finder

As in (1997), Saylor's previous collection featuring Gordianus the Finder, these nine carefully researched stories cover the early phase of the ancient Roman sleuth's career, affording fans the chance to witness the growth of some important personal and political relationships, including Gordianus's connection with the legendary orator Cicero. Though Saylor's novels in this acclaimed series allow him more scope to describe settings and develop his secret Roman history, he still manages, especially in the book's highlights, "The Cherries of Lucullus" and "The White Fawn," to suspend disbelief and make all his characters feel real. Some story mysteries prove to have a noncriminal resolution, but the twisty fair-play plotting that marks Saylor's best novels ( ; ; etc.) is very much in evidence, especially in "Archimedes's Tomb" and "Death by Eros." A partial chronology and historical notes round out this excellent volume.