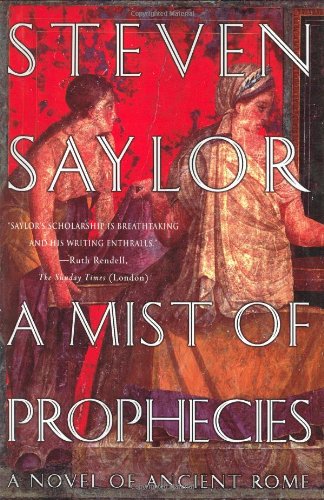 A MIST OF PROPHECIES: A Novel of Ancient Rome

In Saylor's ninth outstanding Roman historical (after 2000's ), it's 48 B.C. and the Empire is wracked by civil war and civic unrest. In Rome, the beautiful and enigmatic seeress, Cassandra, has everyone from Forum "chin-waggers" to high-society matrons entranced by her convulsionlike attacks of prophecy. Gordianus the Finder, more captivated than most, finds himself involved—professionally and romantically—with the seeming madwoman. Officially he's retired from his finding duties, but he resumes the hunt after Cassandra, just before dying in his arms in the market, whispers, "She's poisoned me!" Seven of Rome's most influential women—including Caesar's wife, Calpurnia—attend the seeress's humble funeral. All have something to do with Cassandra's fate, just as she, in secret ways, has something to do with the fate of Rome itself. The action picks up as Gordianus interviews these women and tries to sort out their connections to Cassandra. Conversations among Gordianus's chin-waggers also serve to clarify the situation. As usual, Saylor's research is impeccable, but the history never distracts from the very human drama. Especially touching is Gordianus's wife, Bethesda, whose "malady" is a source of concern and mystery to her errant husband. With this intelligent and compelling story, Saylor shows once again why fans of ancient historicals regard him as the leader of the field.