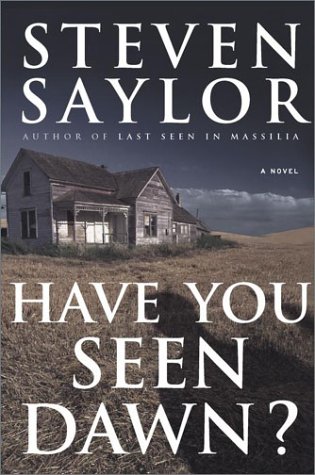 HAVE YOU SEEN DAWN?

The deservedly large and devoted following of Saylor's outstanding Roma Sub Rosa historical mysteries is likely to be disappointed with his latest effort, a contemporary serial killer story. The conventional, paint-by-the-numbers plot has Rue Dunwitty, a colorless young dot-commer, returning to her sleepy hometown of Amethyst, Tex., to find that a pretty teenager is missing and presumed dead. Several encounters with the girl's fraternal twin brother prompt Rue to begin her own inquiries and lead to her discovery of a body on property abandoned long ago by her estranged father. Unfortunately, no corpse is in evidence when she returns with the sheriff. Amid her amateur sleuthing, Rue juggles two romantic interests: the local deputy, who had moved to the small town as a retreat from horrors he witnessed while serving as a police officer in Corpus Christi, and a co-worker from San Francisco, who happens to be near Amethyst at the time of her visit. Of Saylor's many strengths, only his gift for evoking a certain time and place is manifest. The lack of suspense, an interesting puzzle and any psychological depth is especially surprising given the author's previous consistent skill at crafting those elements. His Gordianus mysteries are filled with strong, interesting women, yet his modern heroine comes across as a clueless damsel in distress who only stumbles on the truth when it appears directly in her path. Saylor has been successful outside of ancient Rome before (), but this outing won't broaden his horizons.