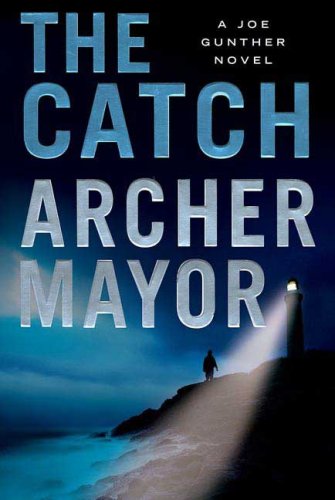 The Catch: A Joe Gunther Novel

At the start of Mayor's fine 19th Joe Gunther novel (after 2007's ), Vermont deputy sheriff Brian Sleuter gets shot in the temple while making a routine traffic stop near the Canadian border. The video camera on Sleuter's cruiser taped the murder, so it appears to be a simple case, but Mayor never makes things simple. Since the pair that Sleuter stopped have a drug history, Joe Gunther, head of the Vermont Bureau of Investigation, coordinates with Immigration and Customs Enforcement in Boston. In a smash-bang arrest attempt, one suspect is killed, the other escapes. Joe follows him to Maine, where a drug distributor was recently murdered, drawing Joe and his staff into a fight for control of the New England drug trade and a vengeful family feud. The plot meanders and relies on coincidence more than usual in this superior regional series, but a surprise resolution to the cop killing and an unexpected final “catch,” one of many in the story, will leave fans feeling fully satisfied.