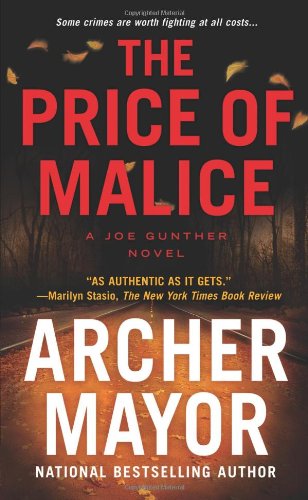 The Price of Malice: A Joe Gunther Novel

Two mysteries preoccupy Joe Gunther in Mayor's engaging 20th novel to feature the Vermont Bureau of Investigation police detective (after 2008's ). When the body of 32-year-old Wayne Castine, “stabbed a bunch of times, and maybe shot and beaten,” turns up in an amateur prostitute's apartment in Brattleboro, Vt., Gunther and his team investigate. Evidence suggests Castine, who had a relationship with a colorful trailer park family, was a pedophile or even a psychopath. Meanwhile, new information surfaces about Gunther's girlfriend Lyn Silva's father and brother, who vanished in a boat off the New England coast. Silva's investigation into her family members' disappearance distracts Gunther from the homicide inquiry. While some readers may find the shifts between the two cases jarring, Mayor manages to keep the suspense building and the reader guessing until the end. Series fans will appreciate the local cultural insights and the authentic cop lingo.