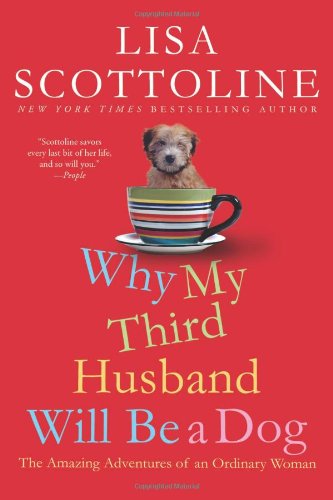 Why My Third Husband Will Be a Dog: The Amazing Adventures of an Ordinary Woman

Brief, punchy slices of daily life originally published in her column allow novelist Scottoline ( ) to dish on men, mothers, panty lines and, especially, dogs. Somewhere in her mid-50s, twice divorced (from men she calls Thing One and Thing Two) and living happily in the burbs with her recent college-graduate daughter and a passel of pets, Scottoline maintains a frothy repartee with the reader as she discusses ways she would redecorate the White House (“Cupholders for all!”), relies on her built-in Guilt-O-Meter to get dreaded tasks done (a broken garbage disposal rates only a 1, while accumulating late fees at the library rates a 7) and contemplates, while making a will, who will get her cellulite. For some quick gags, Scottoline brings in various family members: mother Mary, a whippersnapper at 4'11” who lives in South Beach with her gay son, Scottoline's brother Frank, and possesses a coveted back-scratcher; and her Harvard-educated daughter, Francesca. Plunging into home improvement frenzy, constructing a chicken coop, figuring out mystifying insurance policies and how not to die at the gym are some of the conundrums this ordinary woman faces with verve and wicked humor, especially how her beloved dogs have contentedly replaced the romance in her life.