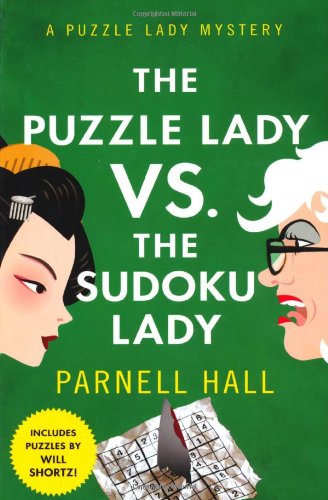 A foreign rival challenges Cora Felton in Hall's amusing 11th mystery to feature the Puzzle Lady of Bakerhaven, Conn. (after 2009's ). Minami, the Sudoku Lady, arrives from Japan dressed in traditional garb, along with her resentful 16-year-old niece, determined to prove to Cora, whose book has displaced Minami's as the #1 bestselling sudoku title in Japan, that she can construct superior sudoku puzzles—and solve crimes, just like Cora. Conveniently, Minami meets Cora at the home of Ida Fielding, who the night before fell and hit her head on an andiron with fatal results. Minami is sure Ida's husband, Jason, killed her, even though Jason was in jail at the time, under arrest for being drunk and disorderly. That none of this is remotely plausible scarcely matters. puzzle editor Will Shortz supplies four sudokus and two crosswords.