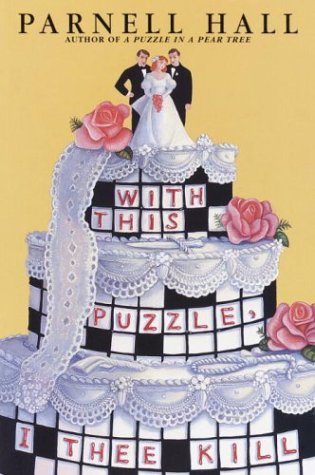 WITH THIS PUZZLE, I THEE KILL

Hall's light touch continues to entertain, although Cora Felton's "secret," which wasn't well-hidden in her debut in A (1999), is so worn now as to be completely transparent in this fifth adventure. Cora is the "Puzzle Lady" to admirers of her syndicated crosswords, but her niece, Sherry Carter, is the real author of the puzzles. The fiction, begun when Sherry needed to hide her identity from an abusive ex-husband, is constantly being tested in the little town of Bakerhaven, Conn., where they live. Cora's real forte is solving murders, and quiet Bakerhaven has had murders and puzzles aplenty since aunt and niece took up residence there. The usual players assume their accustomed roles here, from clueless police chief Dale Harper to reporter Aaron Grant. Oft-married Cora is being wooed again, this time by Raymond Harstein III, whose past is a bit clouded. Sherry's best friend, Brenda, asks her to be maid of honor—only her groom is Sherry's abusive ex, Dennis Pride. Hall keeps the complications coming fast, as Sherry tries to cope with a proposed double wedding that could prove doubly disastrous. As always, puzzles, this time cryptograms, play an integral part in the mystery. Hall's trademark word play and gift for creating eccentric characters remain as sharp as ever.