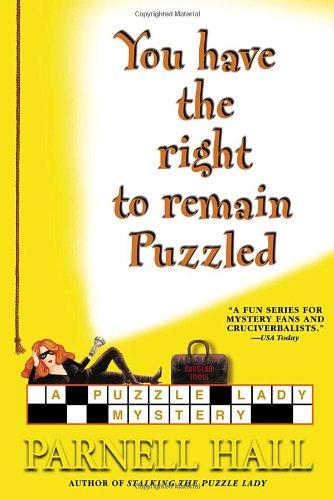 You Have the Right to Remain Puzzled: A Puzzle Lady Mystery

Parnell's lighthearted eighth installment in her cruciverbalist series (after 2005's ) finds feisty, grandmotherly Cora Felton charged with plagiarism murder—accusations she'll have to do some fast talking and sleuthing to defy. But Cora, who poses as the Puzzle Lady while her niece Sherry Carter actually writes the crosswords, prefers solving mysteries to puzzles. So when smalltown crook Benny Southstreet first claims she stole his crossword puzzle (retaining her lawyer in the suit), and then turns up dead, she relishes the challenge. The tangled plot involves stolen antique chairs, incriminating photographs of Cora and her prints on the murder weapon, but the irrepressible heroine emerges unscathed. Hall includes several crossword puzzles that will have fans sharpening their pencils.