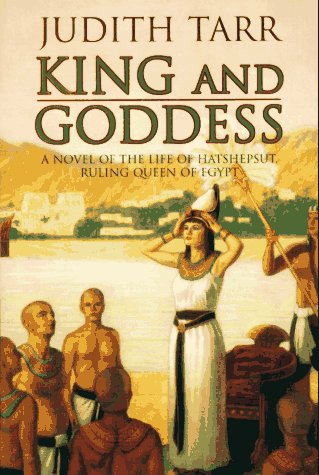 Egypt's ""most notorious"" female king, Maatkare Hatshepsut, is the captivating subject of Tarr's latest novel of ancient Egypt. The story opens as Senenmut, a homely, arrogant young scribe, arrives at the royal palace in Thebes as a gift to the ""girlchild"" Queen Hatshepsut--the Great Royal Wife of King Thutmose II, who is her half-brother. Hatshepsut and the war-hungry king are living gods. The royal marriage has yet to be consummated, however, because the queen considers the king ""a sweaty, panting lout without the least grain of delicacy."" Recognizing her duty to produce an heir, she orders Isis, a beautiful maidservant, to prepare the king for her by teaching him the art of lovemaking. When Hatshepsut at last gives birth to a girl instead of the desired boy, the queen refuses to care for her, appointing Senenmut as her daughter's tutor and guardian. The birth of a stillborn son leaves the queen infertile. Her hatred toward the king crystallizes after Isis, now his calculating concubine, gives birth to an heir, Thutmose III. When the king suddenly dies, further intrigue unfolds, leading to Hatshepsut, now queen regent, seizing her chance to gain the throne. Tarr evokes Hatshepsut's ruthlessness as well as her vulnerability, and provides vivid portraits of Senenmut, Thutmose III and other real historical figures. Hatshepsut's courtship of the Egyptians, her peaceful reign and Thutmose III's ultimate revenge against her add up to a dramatic tale. (Aug.)
close
Details