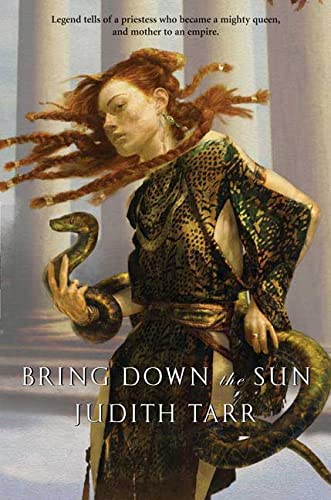 Bring Down the Sun

Ancient history and violent religious myth collide in this romantic fantasy-tinged biography of Myrtale, the imposing, powerful mother of Alexander the Great. Tarr ( ) opens with a weak segment on the queen's early days as Polyxena, an impossibly beautiful and rather childish acolyte of the Mother goddess. Once she seduces Philip of Macedon, who calls her Myrtale (â€œcrowned oneâ€) and promises her a kingdom to go with her queenly new name, the story becomes far more compelling and suspenseful. As temples and kingdoms plot and quarrel, Myrtale mercilessly wields the authority of the retiring goddess and her own sexuality to further her ambitions for her husband and her son. (The book ends with Alexander's birth, leaving unmentioned the complex and bloody intrigues of Myrtale's later life as the dowager empress Olympias.) Occasionally confusing but often vibrant, this romantic story warms into a strong narrative about a fascinating woman.