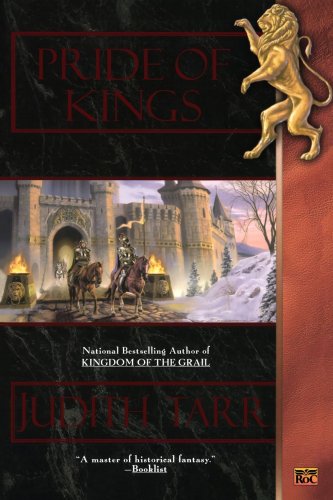 The fantastic may be subsidiary to fact in Tarr's () latest historical fantasy, but it lends an eerily beautiful, sometimes frightening undercurrent to this engrossing, thoroughly satisfying novel, set in the late 12th century. England's Richard the Lionheart, lusting for men, poetry and war in Palestine, sets off on a crusade, leaving his brother, Prince John, to look after the kingdom. Prompted by the ghost of a Saxon saint, who promises him "powers beyond the reach of mere mortal king," John agrees to seize the throne. The price is steep—history will treat him as a traitor, a betrayer of his brother's trust—but John truly loves Britain and its people, unlike Richard, and is thus a worthier monarch in the view of certain higher powers. Summoned to England to help John is the French youth Arslan ("lion" in Turkish). The son of a lord and a female spirit, Arslan moves readily between the faery and the human worlds. Tarr smoothly blends a dazzling array of characters from both history and myth: Eleanor of Acquitaine, her "face still beautiful, like a wood in winter, stripped of all its softness"; Philip of France, who after abandoning Richard in Palestine seeks to invade Britain; "Robin o' the Wood... crowned with oak-leaves and carrying a great bow"; and the enchanted Lorelei, who wears "a woman's shape" but "the suppleness of its movements was not truly human." At the end, the author even throws in the Ring of the Nibelung, but such is the quality of her prose that no extravagance seems forced or extraneous. A firm sense of place, notably London and Paris, contributes to a totally credible delight.