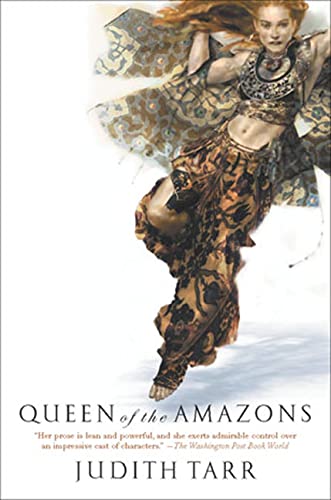 QUEEN OF THE AMAZONS

In her latest stirring historical fantasy, Tarr ( , etc.) explores the tantalizing relationship between the macho Alexander the Great, hero of her 1993 novel, , and Hippolyta, the sensuous queen of the Amazons. When Hippolyta, ruler of the fabled female warriors of Greek lore, gives birth to her firstborn, the baby girl is soulless. The Amazon clan's children call the beautiful but empty infant "Etta" ("that thing"), because she can't be officially named until she has a soul. Hippolyta believes one will eventually possess her child's body and declares Etta royal heiress, outraging some of the tribe, especially her jealous cousin, Phaedra, who vows vengeance when she is exiled. The arrival of Alexander of Macedon in Persia leads Hippolyta, driven by the Goddess, to challenge him to a fateful fight that leaves her daughter in Alexander's world but with a higher destiny still in the cards. The soul that Etta receives through a magical transference after she grows to adulthood is unlikely to come as a surprise ("The soul has no gender"), though it provides a cool twist on the classical legend. Tarr's fluid plotting and careful research will keep readers intrigued despite her deceptively simplistic and, at times, workmanlike prose.