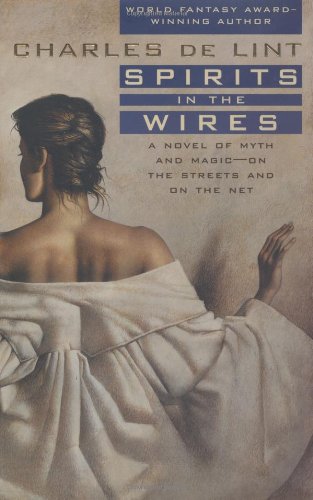 SPIRITS IN THE WIRES

Canadian author De Lint follows up 2001's triumphant with another fine novel dually based in the fictitious city of Newford and a magical otherworld, where spirits of faerie and folklore occupy modern technology and cyberspace is a fantasy realm in which imagination fuels artificial intelligence. When a virus crashes Wordwood, a Web site existing in an "impossible limbo in between computers," a lot of people disappear, including Saskia Madding, girlfriend of perennial Newfordian character Christy Riddell. Saskia literally sprang full-grown from a computer and was already suffering an identity crisis when sucked into oblivion. She escapes by taking up residence in the same body as Christiana Tree. The heroic Christiana, Christy's "shadow," must restore Saskia to her own body, sort out what happened to Wordwood, and figure out what can be done to save it and the rest of the spirit world from chaos. Meanwhile, Christy and a band of companions leave consensual reality and enter the Internet spirit world, seeking to save Wordwood and those who have gone missing. De Lint makes the binary tangible and handles his concept of technological voodoo with intelligence, verve and wit while introducing fascinating new characters and expanding on old ones. Not surprisingly, everyone eventually discovers that it doesn't matter where we come from but who we are that counts—but their journeys to that conclusion will please previous fans and find new ones for this master of the modern fantastic.