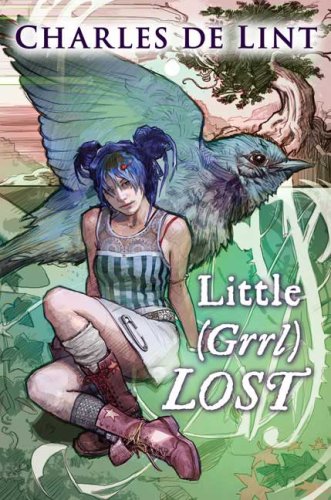 Oh, crap, don't swat me.” Those are the first words spoken by Elizabeth, a six-inch-tall, sarcastic “Little,” upon meeting 14-year-old T.J., a soft-spoken goody-two-shoes. T.J. feels depressed because she has to give up her beloved horse when her family moves to the suburbs of De Lint's ( ) mythical town of Newford. Elizabeth has family troubles of her own—she has run away, and shortly after she meets T.J., her parents and siblings disappear. Together, the girls set out to speak with Sheri Piper, a local children's book author who has written about Littles (and who previously appeared in De Lint's short story collection, ). But their plan is interrupted when a gang of bullies steals T.J.'s backpack with Elizabeth inside. The narrative alternates between the girls' perspectives, as Elizabeth uncovers information about her family history and T.J. attempts to connect with Sheri Piper. Although the two protagonists could not be more different in terms of temperament (not to mention size), by book's end they've both matured into winsome heroines. A sprinkling of pop culture references can feel jarring, as though the book were trying strenuously to be contemporary. However, on the whole, De Lint's latest—which he based on a short story that appeared in last year's anthology—adeptly braids the fantastic and the everyday. Ages 12-up.