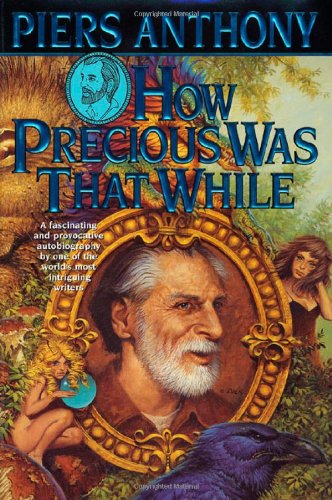 HOW PRECIOUS WAS THAT WHILE: An Autobiography

In this autobiographical sequel to 1988's , Anthony tacitly and emphatically acknowledges that his readers mean more to him than critics, publishers or editors. Anthony, a renowned fantasy writer, creator of the Xanth series, dedicates a chapter called "The Early Part of Dying" to his fans and their sometimes highly personal correspondence, sharing their "inner agonies" (often he spends two full days a week answering letters). Some controversial segments focusing on the intricacies of the publishing industry might be applauded if they weren't so terribly black-and-white. Seemingly defensive, Anthony accuses the review industry of housing unqualified, subjective reviewers: "In a general way, many reviewers have a bias against success, so they try to bring down the most successful fiction while promoting the least successful." Discussing his novelizations of movies (e.g., ), he opines, "Novelizations are sneered at by critics, but of course it seems that that's interesting is panned by critics." His vitriol isn't reserved for the publishing biz: he hates Dallas, for instance, because JFK was assassinated there; based on that long-ago event, he's decided that Dallas's entire police force is still incompetent. His thoughts on his craft, not his focus on sales figures, make for the most interesting passages. "A writer who waits for inspiration may wait forever" is far more illuminating than "Do you ever wonder why the latest Stephen King novel is in every store?... To [publishers], books are just a product, and King sells better than Brand X."