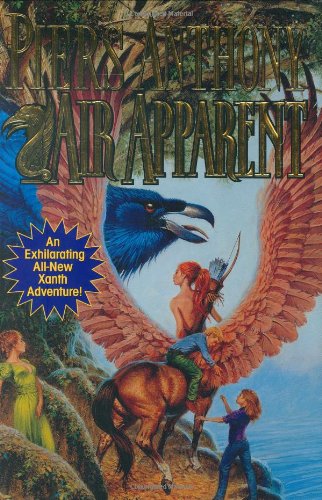 In this meandering 31st Xanth novel, Hugo, son of the Gorgon and Good Magician Humfrey, vanishes from his cellar, where the body of a murdered man just as suddenly appears. What's worse, Humfrey's book of answers has been scrambled, and blind Wira, Hugo's wife, has no idea how to solve a mystery. Her prayers are answered by 13-year-old Debra, visiting from Mundania in hopes of lifting the curse that makes her name sound like “De-bra” to any man she meets. Without the book, the curse cannot be cured, so the Gorgon temporarily turns her into a naturally bra-less flying centaur in exchange for her help. As they hunt down Hugo and the killer, Debra and Wira encounter the usual crop of terrible puns and characters both new and familiar. Acknowledging that reader loyalty keeps this venerable series going, Anthony includes an extensive afterword, providing credits for 140-odd (in some cases, very odd) suggestions and updating fans on everything from the state of his health to the length of his hair.