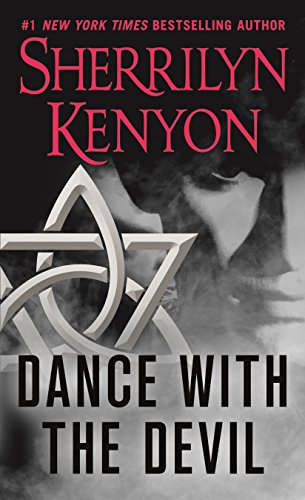 DANCE WITH THE DEVIL

The third entry in Kenyon's Dark-Hunter series, which focuses on the sexy vampire-like immortals who defend humans from soul-stealing Daimons, is darker than last year's due to its change in setting (from the French Quarter of New Orleans to the isolated Alaska wilderness) and its focus on Zarek, the baddest of all the Dark-Hunters. Physically gorgeous but scarred psychologically thanks to his former life as a Greco-Roman slave, Zarek is bitter, feared and rejected by everyone, including the Greek goddess who transformed him. It's up to the emotionally detached nymph Astrid, sister to the three Fates, to judge whether 900 years of isolation has made Zarek too vicious to be redeemed. To accomplish this task, she tries to push Zarek "to the heights of his tolerance and beyond." Sasha, a werewolf posing as a mere pet, serves as her protector, and the witty telepathic banter between them is a nice counterpoint to the seriousness of Zarek and Astrid's relationship. Kenyon's slangy dialogue also leavens the story. In the midst of a heated battle, for instance, a disoriented Astrid asks Zarek what's happening, and his blasé reply is, "Not much.... Some invincible asshole is trying to kill me." Those who can't get enough of bad boy heroes and reruns will relish this roguish tale.