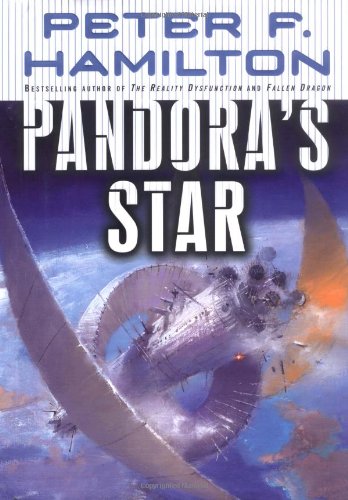 Hamilton's exhilarating new opus proves that "intelligent space opera" isn't an oxymoron. By the 24th century, the vast human Commonwealth has spread from Earth via artificial wormholes. Various benign or seemingly indifferent alien races have been encountered during exploration of new planets, but an astronomer sparks curiosity by announcing that a pair of stars is enclosed by a mysterious energy barrier. Unfortunately, a space expedition discovers that the shield was created to imprison an insatiably greedy mass mind that sees any other race as a mortal threat. When the barrier somehow is lowered, the alien immediately attacks the largely unprepared Commonwealth, while humans begin wondering if yet another inhuman power has manipulated events that unleashed this threat. The author deftly juggles many characters in multiple plot lines, sometimes slowing down the action briefly, at other times racing forward. Revelations late in the book will have readers scurrying back to earlier pages to reinterpret what they initially thought. Not many SF writers are capable of tackling such a big project so confidently. In this respect, Hamilton ( ) resembles a less cheery but very tech-savvy—and extremely paranoid—Charles Dickens. Given the abrupt cliffhanger of an ending, some may prefer to save this massive installment until the story's conclusion, , appears next year. Anyone who begins this one, however, probably won't be able to put it down.