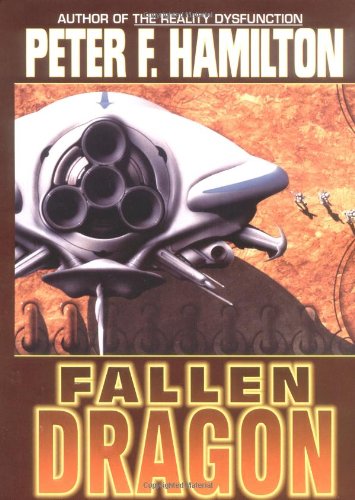 This hefty novel of interstellar war and alien contact in the 25th century, a sort of as if written by Charles Dickens, ranks as one of Hamilton's best. Though he's a mercenary for the Zantiu-Braun corporation, which gets its profits by periodically looting old interstellar colonies, Lawrence Newton has his eye on picking up a treasure trove of alien technology on his employer's approved list of loot. When the Zantiu-Braun Third Fleet descends on the planet Thrallspring, the invaders unexpectedly find the inhabitants, who have access to some of that lost alien technology, prepared to fight back. After several hundred pages of well-depicted action and intrigue, the technology of the "dragons" makes the war superfluous, a definite victory for all opponents of the corporate pirates. It also makes it possible for Newton himself to travel in both time and space, and to put right the mishandling of a youthful love affair that forced him into exile in the first place. Ignoring conventional wisdom about expository lumps, flashbacks and viewpoint shifts, Hamilton () nicely develops character while he also does some fine world building that's as good as it gets in space opera short of Lois McMaster Bujold. Despite the somewhat uneven pacing, the book is undeniably a page-turner and should provide many absorbing hours for the author's existing readers as well as a salutary introduction to a major SF author for a new audience.