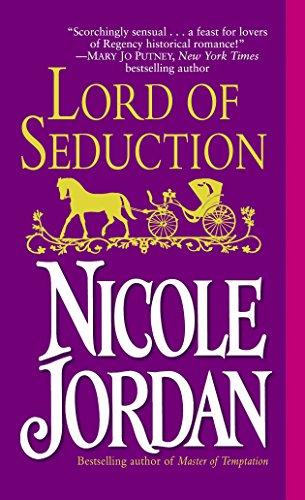 Ladies, loosen your corsets and take a deep breath, because Jordan's newest (after ) is another sensual Regency starring an alpha male and the spirited woman who captures his heart. Viscount Christopher Thorne, a member of the secret society Guardians of the Sword, sworn to uphold honor and defeat tyranny, has his world shattered by the killing of his best friend and fellow Guardian, Nathaniel. A year later, on the Mediterranean isle of Cyrene, Nathaniel's beautiful cousin Diana gives Thorne a letter written by Nathaniel shortly before his death that makes Thorne realize that his friend was murdered and all the Guardians are vulnerable. To keep his dynasty-obsessed father off his back while he returns to London to investigate, Thorne proposes a sham betrothal to Diana—which he soon wants to make real. Wary of Thorne's rakehell past, Diana refuses to believe he loves her, and it's only during the gripping climax that Diana admits that she can't live without him. Though the first half is light on plot and heavy on sensual encounters, the pace of the second half soon picks up, plunging Thorne and Diana into the mystery of Nathaniel's death. The tame jacket art gives no clue to the story's high sex content, but those familiar with Jordan's work won't be fooled.