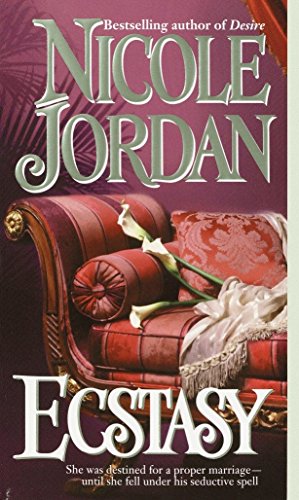 The fourth installment in Jordan's Regency-era Notorious series (, etc.) is devoted to spirited Raven Kendrick, whom readers will recognize from . Raven is on the verge of fulfilling her deceased mother's greatest wish—to wed a nobleman. Her good fortune takes a turn for the worst, however, when she's abducted en route to the nuptials by jilted suitor Sean Lasseter and taken to his brother, Kell's, gaming hell. Sensual scenes abound between Raven and Kell after he rescues her from Sean's certain abuse, including an outlandish one in which Kell tends Raven, who is suffering from the effects of an aphrodisiac given to her by Sean. Before long, Raven realizes that only marriage will repair her reputation, and when an honor-bound Kell reluctantly offers, she accepts even though the prickly Irishman is rumored to have murdered his uncle. Inevitably, Kell and Raven are unable to keep their physical passion from turning into love, but to Jordan's credit, their bond is founded upon mutual admiration, not merely great sex. Sean's reappearance adds a dash of danger, and the love scenes, while numerous, aren't gratuitous. The real joy here, however, comes from watching Kell and Raven overcome their pasts and their fears so they can build a future together.