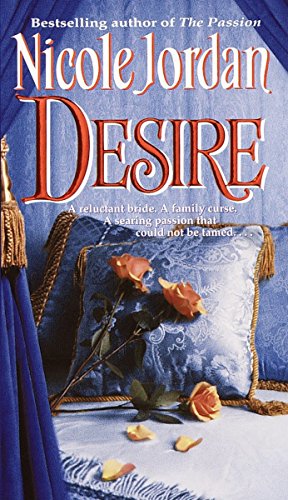 Following in the tradition of and , the third installment in Jordan's Regency-era Notorious series is rife with sensual love scenes and the kind of misunderstandings and misadventures typical of the genre. When English spymaster Lucian Tremayne, the Earl of Wycliff, comes across Brynn Caldwell as she's emerging from the ocean after a swim, he finds himself irresistibly drawn to her and offers for her hand in marriage. Brynn refuses, informing him of her family's curse—the women in her family are doomed to lure the men who love them to their death. Unafraid of a mere curse, Lucian convinces Brynn to marry him by offering to help her family out of debt. In a plot twist familiar to Regency fans, Brynn and Lucian each struggle to keep their emotions separate from their desire for one another but, inevitably, love blossoms between the two. This overused story line is enlivened by a subplot involving a gold smuggling operation that strikes close to Lucian's home and leads him to mistrust his beguiling wife. The sex scenes here are fewer and less explicit than in Jordan's earlier entries, but the novel's intricate plot and colorful characters more than compensate. This delightful tale will please fans and newcomers alike.