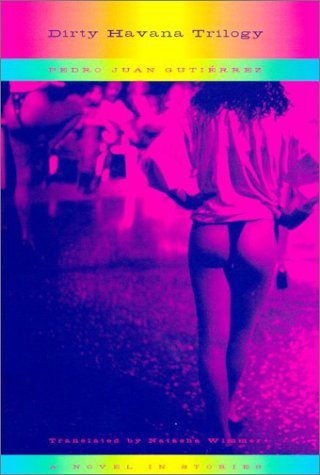 The streetwise gutsiness of Bukowski and Miller pervades Cuban poet Guti rrez's raunchy, symbolic, semi-autobiographical debut novel of life in 1990s Havana. Although the title suggests a triptych, the work more closely resembles a mosaic of short stories bursting with vivid images of exhilaration, depravity, desire and isolation. Narrator Pedro Juan, middle-aged and fed up, has rejected his career as a journalist because ""I always had to write as if stupid people were reading me."" Resisting the mass exodus from Cuba of August 1994, Pedro Juan now wanders the streets of Havana like a footloose Bacchus, indulging himself with women, marijuana and rum. He survives through a series of menial jobs. His rooftop apartment in central Havana has a spectacular Caribbean view but is, like all dwellings in the decaying economy, frequently without water. Pedro Juan is imprisoned more than once for minor crimes; after one lengthy sentence, he returns home to discover that his lover has replaced him with another man. He eventually drifts back into the urban maelstrom. Prolific, explicit sex scenes reinforce the plight of the artist, and thus a society, limited to physical pleasures where life offers no intellectual or creative rewards. ""It's been years since I expected anything, anything at all, of women, or of friends, or even of myself, of anyone."" Guti rrez's talent lies in creating a macho, self-abusive protagonist who remains engagingly sympathetic. This searing, no-holds-barred portrait of modern Cuba, expertly translated by Wimmer into prose strong in the rhythms and vulgar beauty of the city, comes complete with a sexy jacket photo. It will attract readers who like their fiction down, dirty and literate. (Jan.)
close
Details