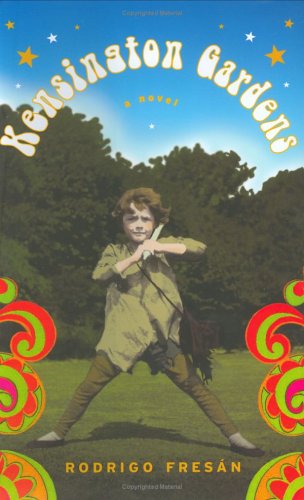 The "tycoon hermit of children's literature," Peter Hook, kidnaps the child star of the upcoming film version of his hero's adventures . The book is constructed as a confession foisted by Hook on the bound and drugged child star Keiko Kai, one that reels back through Hook's life story. Hook's parents were an emblematic '60s couple: his mother, Alexandra Swinton-Menzies, was a modish scion of the aristocracy; his father, Sebastian Compton-Lowe, was the leader of a cult band, the Victorians; the mysterious death of a brother, Baco, unfolds as Hook's confession reaches its end and relates to the deaths of Hook's parents. All of this took place before Hook's childish eyes, through which we also see, in the style of the Sgt. Pepper album cover, celebrated '60s people. Into this mix, Fresán, an Argentina-born, 10-novel veteran making his debut in English, inserts the life of Peter Pan's creator, J.M. Barrie (of whom there is a statue in London's Kensington Garden), Barrie's nonsexual cuckolding of Arthur Llewelyn-Davies and his slow takeover of the Llewelyn-Davies family. Unfortunately, Barrie's story threatens to do the same thing with Fresan's novel. Fresan has things to say about childhood, the '60s, history, death and youth, but he does not successfully imagine a character to hang them on.